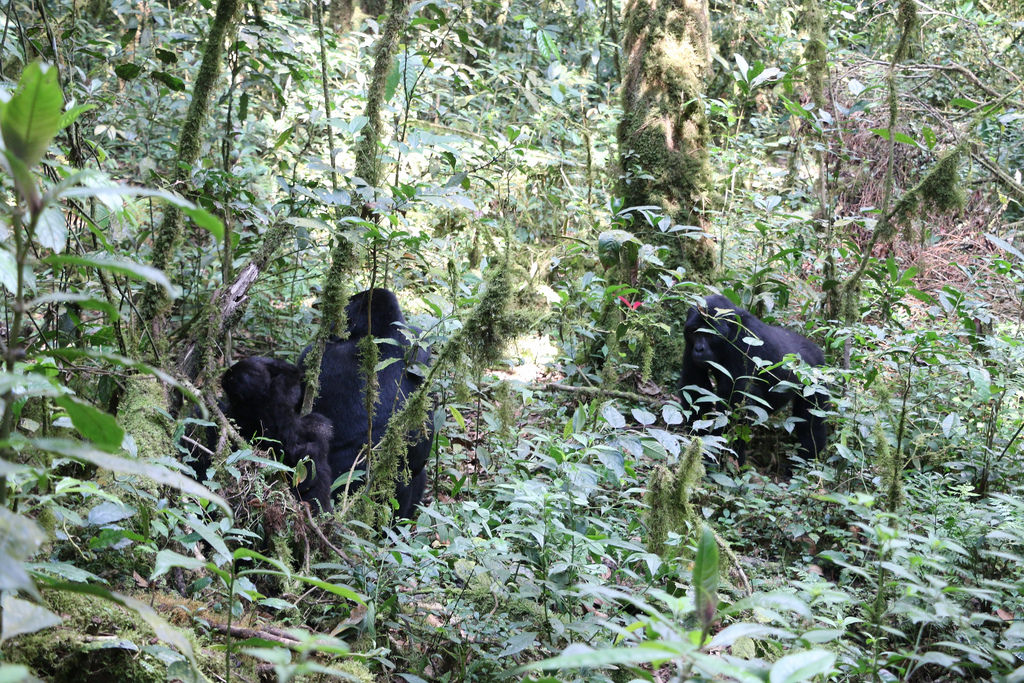 When we talk of mountain gorillas many people’s mind rush to Uganda which is sometimes known as the pearl of Africa, its honored to be among the gifted three nations in the world to host this rare species of gorillas, the other two countries include Rwanda and Democratic Republic of Congo. Uganda is located in east Africa and it’s regarded as one of the smallest countries not only in the east Africa but also in whole world. it covers an area of about 241551sqkm. Uganda is among the most visited countries in the world, very many visitors whole over the world jet in to come and see the natural wonders that inhabit the country more so the endangered mountain gorillas.

Gorilla tracking is the most done interesting adventurous activities done in Uganda, meeting these giant apes in their natural habitat is regarded as a moment in life very difficult to forget. Gorilla tracking in Uganda is done in two parks one is Bwindi impenetrable national park and Mgahinga national park both are located in the south western part of Uganda. Uganda is known for housing the highest percentage of these remaining apes estimation over 480 individuals out of 900 remaining gorillas live in these two parks, however Bwindi houses the most highest percentage and many travelers prefers tracking in Bwindi than Mgahinga since the one group that lives in Mgahinga tend to migrate to the nearby countries Rwanda and DRC in search for adventure making it very difficult to track. Gorilla tracking is the major highlight to any traveler to this African country forcing many people to leave their beautiful homes and offices to come and spend at least 1-2 days in the wild with these apes.

Tracking begins very early in the morning after reporting at the park headquarters before 7:00qm to receive briefings from the park wardens or senior rangers about the whole process of gorilla tracking and also gets you assigned to the gorilla group to track. After you will follow the ranger guide to the tropical rain forest to begin the gorilla tracking activities possibly the most interesting done activity at the park, tracking time is unpredictable, however it can go from half to full day, and a reasonable degree of fitness is needed as well as tracking gears like sturdy pair of walking shoes. Once you meet these giants you are only allowed to stay with them for only one hour while studying as well as observing their behaviors.

Uganda gorilla Permits are obtained at the Uganda Wildlife Authority found in Kamwokya Kampala and the permit cost US$600 during the high season and US$400 during the low season and this price is per person per tracking, it includes the park entry fee plus the ranger guides. Gorilla tracking Permits are at a very high demand and they are sold on first come first served basis, so you are recommended to book your permit earlier before your travel dates at least 3-5 month to avoid regret. You are also advised to book a gorilla permit through a tour operator or a company organizing your safari as they have easy access to these permits than booking them individually.

However Uganda is not only a home to mountain gorillas but also other primate species are present like chimpanzee which are also fabulous fan to watch in their natural habitat, chimpanzee tracking safaris are also on very high demand and many tourists prefer combining gorillas and chimpanzee tracking on their safari to Uganda. Wildlife safaris are also superb, Uganda is blessed with a big number of games which can be seen during a game drive in a tourist vehicle, Uganda houses all the big five mammals including elephant, leopard, buffaloes, lion, rhino, leopard plus a variety of many other small mammals.

On a Uganda safari you can enjoy both primates and wildlife. For more information about Uganda gorilla safaris and permits contact us we will get back you shortly.