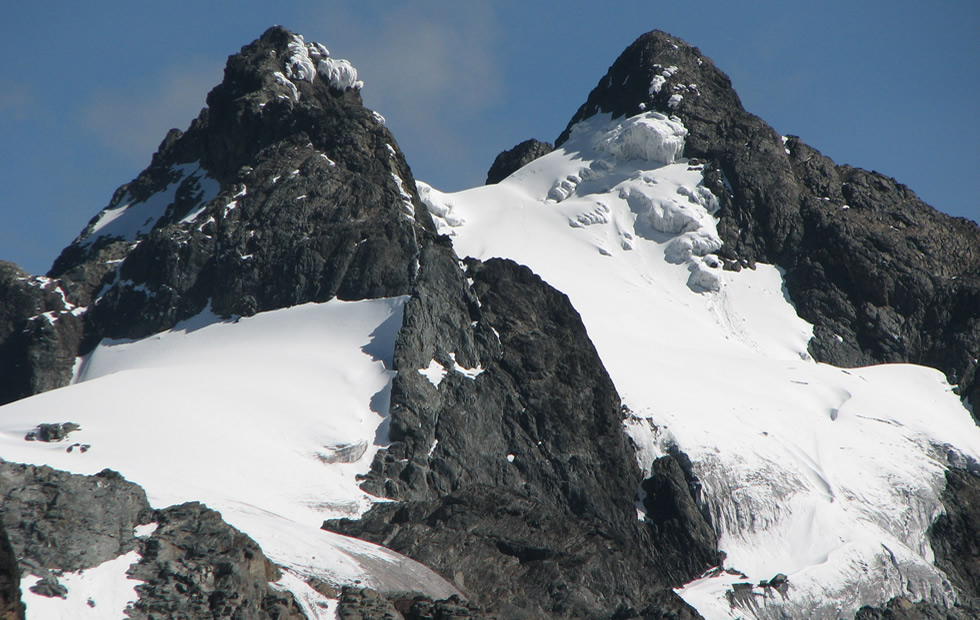 The 6 peaks of the Rwenzori Mountain chain include Mt. Stanley 5109m and this is known for its magical Magherita peak. Mt. Speke 4890m and this features 4 summits including Johnston, Emanuele, Trident, and Ensonga. Together with Mt. Stanley and Mt. Baker, Mt. Speke makes a triangle enclosing Bujuku valley. There is also Mt. Emin Pasha and Mt. Gessi.

Rwenzori Mountains is a block mountain sitting within the beautiful Rwenzori Mountains National Park in Western Uganda. The snow-capped mountain straddles at the edge of border area with D.R. Congo and surrounded by 3 districts of Kabarole, Kasese and Bundibugyo. It is found at a close proximity to Equator where its weather and climatic conditions are greatly influenced by the inter-tropical convergence zone.

Things to See in the Rwenzoris

Lakes in the Rwenzori Mountain range

There are 20 Lakes in the Rwenzori Mountains alone. Lake Bujuku is undoubtedly the major lake and it is found at the top of a deep and curved glacier Bujuku valleys. This is along the shadows of Mount Speke, Baker and Mt. Stanley. The other important water lake is Lake Mahoma which you can explore while trekking along the Central Circuit Forest.

The Rwenzori are one of the most important bird areas in Uganda. Even though there are only 195 species recorded in the park, among them are many rare, threatened and endemic species. The probably most noticeable bird is the Rwenzori Turaco. But also the Francolins, Olive Pigeon, White Necked Raven and Mountain Buzzards are seen in the Range.

Adventure Activities in the Rwenzoris

There are exciting safari activities that can be done in the Rwenzori Mountains National Park. From popular Rwenzori mountain climbs to birding, game viewing, cultural encounters / experiences, a lot await you in the Rwenzoris;

The Rwenzori Mountains is most visited for the following;

Mountain climbing-the main reason for most visits in the Rwenzori Mountain range. Get to hike to the highest peaks including the Margherita peak at 5109m which takes you about 8-9 days or more. All Rwenzori mountaineering adventure are conducted with lead of the experienced guides.

Nature walks and hiking, cultural encounters are among the many alternatives to explore and experience Rwenzori Mountains in Uganda. There are designated nature walking trails and cultural trails leading to the Bakonzo communities.

What to pack for Rwenzori Mountains of the Moon safari

There is a long list of items to have packed for your actual nature walk/hiking safari in the Rwenzori Mountains National Park. They include daypack-waterproof, insect repellents, camera, first aid kit, long sleeved shirts, trousers, walking shoes/boots that are waterproof, sunglasses, socks, water, binoculars etc. If you plan to visit Rwenzori Mountains for nature walk, make sure that you pack appropriately and wear environmentally friendly cloths.

Unlike other usual safari activities, Rwenzori Mountain climbing is perfectly done during the dry season. The dry months of the year in the Rwenzori Mountains are experienced starting June, July, August and December, January, February. These months are preferred by most climbers due to low or even no rains and the trails kept drier which eases visitor climbing adventure to the peaks.

However, visits can still be made to Rwenzori Mountains National Park even during the rainy/wet/low season-(March to May, October, November). The disadvantage about this season is that heavy rains are experienced and trails become slippery-making climbing a little challenging. But you can embark on a number of activities including nature walks, birding, community visits since rains often start and stop shortly. Besides, nature walks or hikes begin early and by the time rains begin, visitors would have returned or covered a significant distance of their trail.

The Rwenzori Mountains National Park in particular has the best comfortable places to stay or book any around the nearby towns like Fort Portal, Kasese, Bundibugyo. In and around Rwenzori Mountains, the best places to book for your hiking or birding tours include Hotel Margherita, Ruboni Community Camp. Mihunga Lodge. The huts are also distributed through the hiking trails if you are undertaking mountaineering adventure and along central circuit, they include John Matte, Nyabitaba hut, Elena hut, Guy Yeoman hut etc.

Getting to the park

Rwenzori National Park sits suitably in the Western part of Uganda and it is surrounded by 3 districts; Bundibugyo, Kasese and Kabarole. The park is occupies all 1000sq.kms of land area and protects diversity of animal species 70 mammal species, 217 bird species, amphibians and reptiles, 6 vegetation zones.