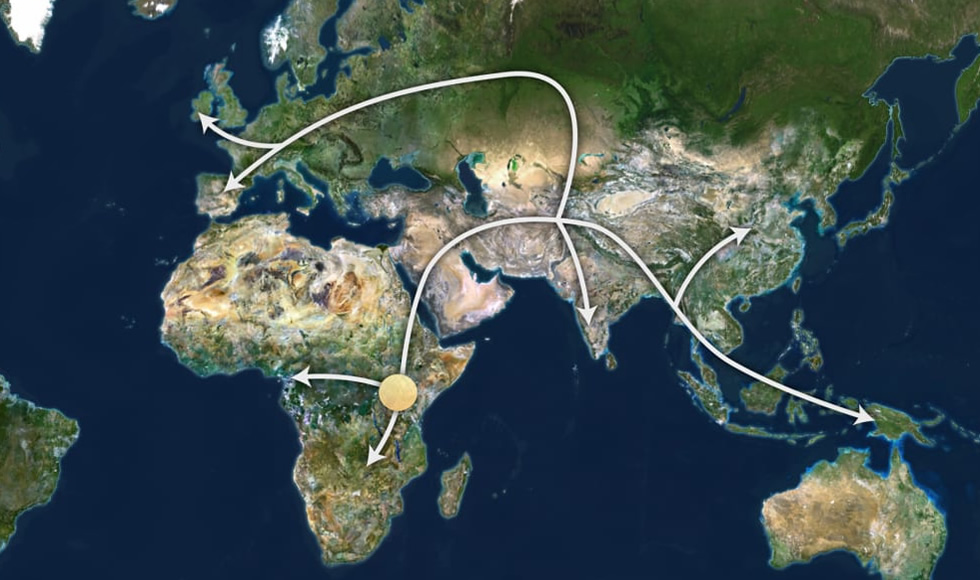 The recent African “Origin of Man” theory or Recent African Origin (RAO) model is designed to explain the origin of earliest humans in Africa. This continent is believed to be the Cradle of Humankind, the first point from which humans originated. This is also known as the Recent Single-Origin Hypothesis or RSOH, as it places the development of the modern civilizations and, indeed, mankind as originating from one central point.

Darwin’s theories in the 1800’s were the original basis for this belief. He hypothesised that all modern life is merely an evolution of an extinct version of the same type of animal and in the same region it had once occupied. Because Charles Darwin believed that all human beings were merely descendants of a prehistoric and extinct ape, this placed the origin of man in the same area as the original site of the apes; i.e. Africa. This theory was supported half a century later by fossils and remains of an ancient hominid civilization and their implements. These were found in Africa. This was the theory of MONOGENISM.

However, in more recent times, DNA evidence as well as anthropological findings have worked together to further add to Darwin’s original ideas. The first human beings are believed to have replaced Neanderthals approximately 150 000 years ago, having been the earliest ancestors of humans on earth. This means that, according to this popular theory, all other mankind on earth originated, at some time in human history, from Africa.

Most scientists believe that the Cradle of Mankind is in East Africa. This is largely because of Olduvai Gorge, Tanzania archaeological and fossilized remains that have been found in significant sites in this part of the vast continent. These include the Olduvai Gorge in Tanzania and Koobi Fora in Kenya.

The 1800’s saw the input of different researchers and anthropologists and thus was born an opposing theory called POLYGENISM. This proposed that the human race is made up of smaller civilisations that developed independently of one another from prehistoric hominids. This theory petered out by the mid 1900’s, although some scientists still hold firm to this conviction.

Major advances were made when, in the late 20th century, technology was developed that could date the migration of man around and out of Africa. Then, in 2000, further developments and testing could trace the mtDNA sequence of Mungo Man – an Australian predecessor of human beings, according to researchers and anthropologists.

There remain many questions and doubts regarding these and other theories and their reliability. Scientific research and archaeological findings present much fascinating evidence, but contradictions, gaps and lack of substantial bases cast doubt. However, most scientists still believe Africa to be the origin of man and the true Cradle of Humankind.