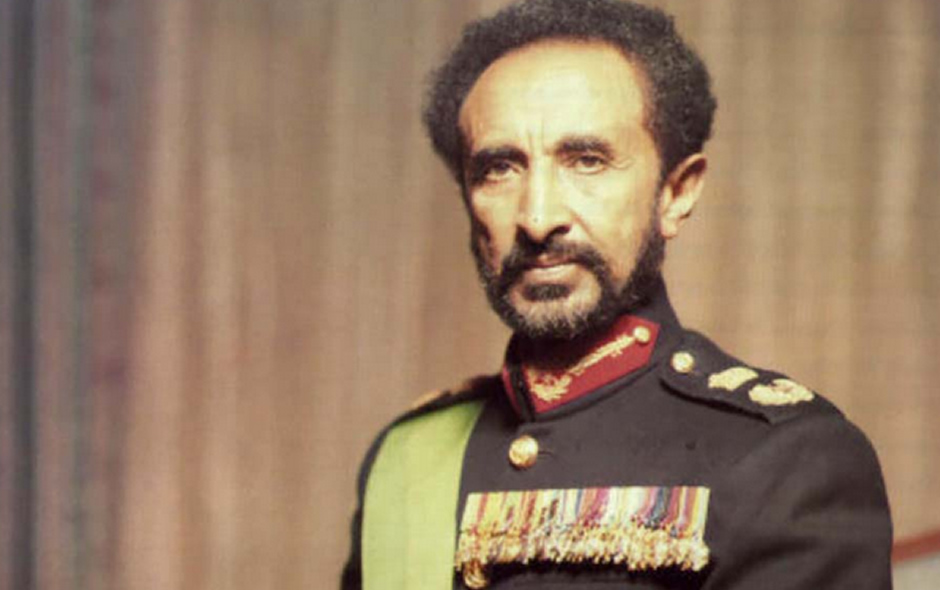 Haile Selassie (23rd July 1892 – 27 August 1975) was Ethiopia’s regent from 1916 to 1930 and Emperor of Ethiopia from 1930 to 1974.  Haile Selassie was known to his people through many titles from ‘Conquering Lion of the Tribe of Judah’ to ‘Emperor of the Nation’. He was an influential figure of the Twentieth Century, symbolising a new African independence from colonialism.

Selassie was born on 23 July 1892 in Ejersa Goro, the Ethiopian Empire. His childhood name was Lij Tafari Makonnen. At his infant baptism, he was also given the name Haile Selassie – which he adopted as his official name in 1930, when he became Emperor. Haile Selassie translates as “Power of the Trinity” and he was also known as the ‘king of kings.’ His subjects also referred affectionately to him as ‘Jah, Jah Jah’, and Jah Rastafari,

In 1916, he became the effective ruler of the Ethiopian Empire – though his position was relatively weak as power was diffused with Empress Zewditu, who acted as head of state and had considerable influence. Tafari sought a policy of careful modernization. He wished Ethiopia to develop materially but retain its distinctive culture and traditions.

“Knowing that material and spiritual progress are essential to man, we must ceaselessly work for the equal attainment of both.” Interview in The Voice of Ethiopia (5 April 1948)

He also traveled around Europe meeting with the heads of state in Europe. This created much media interest because of his colorful and exotic gifts (including lions) and self-confidence in his nation’s independence.

In 1928, Selassie was crowned king and in 1930 was given the title of “King of Kings of Ethiopia”. (Emperor). Shortly after in 1931, he introduced Ethiopia’s first written constitution and provisions for bicameral legislation – it envisaged a gradual development of democracy in the country.

His most testing moment came when the much better-equipped army of Mussolini’s Italy invaded in 1935. Given the overwhelming might of the Italian army, the Ethiopians put up stern resistance and held back the Italians for longer than expected. The Italians also resorted to using of chemical weapons which were forbidden by international treaty.

Nevertheless, despite sterling resistance, he was deposed and eventually forced to leave the country leaving for French Somaliland on 2 May 1936.

In 1936 he addressed the League of Nations criticizing the use of chemical weapons in the invasion of his country. He also warned that now Ethiopia suffered from fascist expansion, but soon others would too.

“Apart from the Kingdom of the Lord there is not on this earth any nation that is superior to any other. Should it happen that a strong Government finds it may with impunity destroy a weak people, then the hour strikes for that weak people to appeal to the League of Nations to give its judgment in all freedom. God and history will remember your judgment.”

His speech made Selaisse a figurehead for anti-fascist supporters around the world, but from the League of Nations, he was able to only gain partial sanctions against Italy and was unable to reverse their occupation.

From 1936-41 he spent his time in Bath, England where he wrote about his experiences.

Following the outbreak of the Second World War, Great Britain found itself fighting Italy on the African front. A British force – comprising Ethiopian-backed African and South African colonial troops were successful in defeating Italian troops in Ethiopia and Selassie was able to triumphantly return. In May 1941, he addressed his people in Addis Ababa to a rapturous reception.

“Today is the day on which we defeated our enemy. Therefore, when we say let us rejoice with our hearts, let not our rejoicing be in any other way but in the spirit of Christ. Do not return evil for evil. Do not indulge in the atrocities which the enemy has been practicing in his usual way, even to the last.”

After the Second World War, Haile Selassie was a supporter of the principle of collective responsibility and the United Nations. Speaking in 1963, he said in a speech to the UN.

“Today, I stand before the world organization which has succeeded to the mantle discarded by its discredited predecessor. In this body is enshrined the principle of collective security which I unsuccessfully invoked at Geneva. Here, in this Assembly, reposes the best – perhaps the last – hope for the peaceful survival of mankind.” H.Selassie 4 October 1963, address to the General Assembly of the United Nations

Haile Selassie was the only statesmen to address both the League of Nations and United Nations. Selassie sought to remain on friendly terms with the West, whilst also supporting African independence. In 1963, he initiated the Organisation of African Unity (OAU) and served as its first head; he made early references to the concept of a United States of Africa.

“Leadership does not mean domination. The world is always well supplied with people who wish to rule and dominate others. The true leader is a different sort; he seeks effective activity which has a truly beneficient purpose. He inspires others to follow in his wake, and holding aloft the torch of wisdom, leads the way for society to realize its genuinely great aspirations.”

On a domestic front, he tried to implement more progressive tax and land reforms but often failed to pass the measures, due to resistance from the land-owning classes and the conservative church.

In the 1960s and 1970s, there was increasing domestic opposition to Selassie’s rule, and in this period political and civil liberties were curtailed. The country also suffered severe famine in 1973 and was involved in civil unrest in the region of Eritrea – which wanted autonomy. The situation was compounded by rising oil prices and inflation – lower the standard of living. Unpopularity with his government culminated in the coup of 1974, where government officials and the Selassie family were arrested, and many executed.

A year later on 27 August 1975, Selassie reportedly died from heart failure, though circumstances around his death are disputed with some Rastafari’s believing he continued to live and others believe he was assassinated by the new military junta.

Amongst the Rastafari movement, Selassie is viewed as a ‘living God’. Selassie visited Jamaica in April 1966 to a rapturous reception by about 100,000 practising Rastafari. Bob Marley became a Rastafari shortly after this visit, writing a song “Iron Lion Zion” which refers to Haile Selassie. Selassie was named Time Man of the Year in 1936 and received numerous accolades throughout his life.