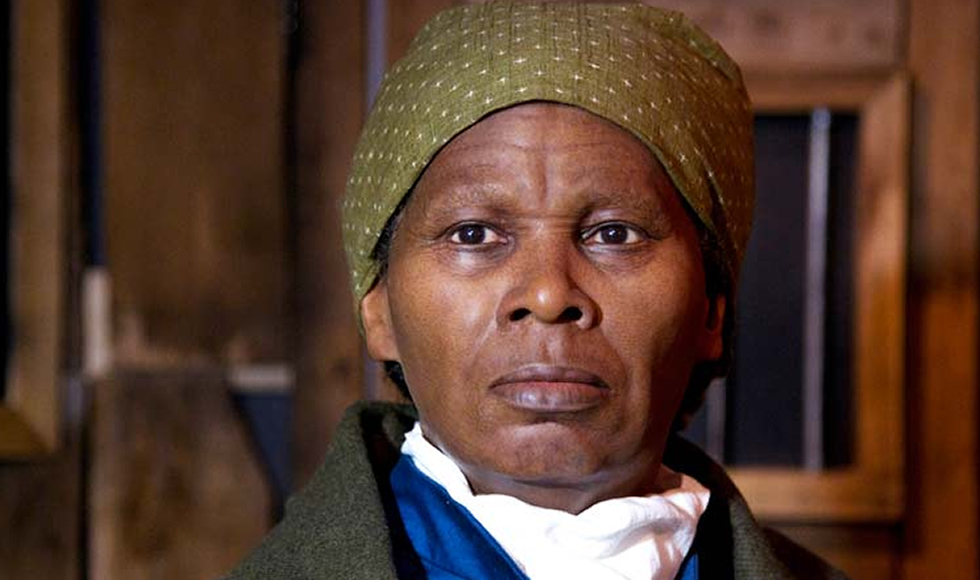 Harriet Tubman was born into slavery in  Dorchester County, Maryland in the year 1820 or 1821 (exact date unknown). She was a slave, fugitive, Underground Railroad conductor, abolitionist, spy, soldier, and nurse recognised for her service during the Civil War and her advocacy of civil rights and women’s suffrage.

Originally named Araminta Harriet Ross, Tubman was nicknamed “Minty” by her parents. At age 5, Araminta (her  birth name) was “rented” to neighbors to do housework. She was never good at household chores and was beaten by her owners and “renters.” She wasn’t educated to read or write. She eventually was assigned to work as a field hand, which she preferred to housework.

At age 15, she suffered a head injury when she blocked the path of the overseer pursuing an uncooperative slave. The overseer flung a weight at the other slave, hitting Tubman mistakenly and sustained a severe concussion. She was suffered the pain for a very long time and never fully recovered from it.

In 1844 or 1845, Tubman married John Tubman, a free black man. She changed her name to Harriet around the time of her marriage, possibly to honor her mother. Shortly after her marriage, she hired a lawyer to investigate her legal history and discovered that her mother had been freed on a technicality upon the death of a former owner.

The lawyer advised her that a court wouldn’t likely hear the case, so she dropped it. But knowing that she should have been born free led her to contemplate freedom and resent her situation.

In 1849, She heard that two of her brothers were about to be sold to the Deep South, and her husband threatened to sell her, too. Following this event, Harriet Tubman escaped to freedom in the North to become the most famous “conductor” on the Underground Railroad.

Tubman risked her life to lead hundreds of family members and other slaves from the plantation system to freedom on this elaborate secret network of safe houses. A leading abolitionist before the American Civil War, Tubman also helped the Union Army during the war, working as a spy among other roles.

Notable Quote: “I had reasoned this out in my mind, there was one of two things I had a right to, liberty or death; if I could not have one, I would have the other; for no man should take me alive.”

The Underground Railroad; Tubman’s organizing ability was crucial to her work with the Underground Railroad, a network of opponents of slavery that helped fugitive slaves escape. Tubman was only 5 feet tall, but she was smart and strong and carried a rifle. She used it not only to intimidate pro-slavery people but also to keep slaves from backing out. She told any who seemed ready to leave that “dead Negroes tell no tales” about the railroad.

Between 1850 and 1860, Tubman made 19 trips from the South to the North following the network known as the Underground Railroad. She guided more than 300 people, including her parents and several siblings, from slavery to freedom, earning the nickname “Moses” for her leadership.

Tubman first encountered the Underground Railroad when she used it to escape slavery herself in 1849. Following a bout of illness and the death of her owner, Tubman decided to escape slavery in Maryland for Philadelphia. She feared that her family would be further severed and was concerned for her own fate as a sickly slave of low economic value.

A rare carte-de-visite of Harriet Tubman jointly purchased by the Smithsonian National Museum of African American Culture and History (NMHAAC) and the Library of Congress, is considered the youngest image of Tubman we are aware of to date.   Photo: Benjamin F. Powelson Collection of the National Museum of African American History and Culture shared with the Library of Congress, 2017.30.4

When Tubman first reached Philadelphia, she was, under the law of the time, a free woman, but passage of the Fugitive Slave Act in 1850 made her a wanted fugitive again.

All citizens were obligated to aid in her recapture, so she had to operate quietly. But she soon became known throughout abolitionist circles and freedmen’s communities. A price had been placed on her head—at one time it was as high as $40,000—but she was never betrayed.

After the Fugitive Slave Act passed, Tubman began guiding her Underground Railroad passengers to Canada, where they could be truly free. From 1851 through 1857, she lived parts of the year in St. Catherines, Canada, and Auburn, New York, where many anti-slavery citizens lived.

In early 1859, abolitionist Senator William H. Seward sold Tubman a small piece of land on the outskirts of Auburn, New York. The land in Auburn became a haven for Tubman’s family and friends. Tubman spent the years following the war on this property, tending to her family and others who had taken up residence there.

Every great dream begins with a dreamer. Always remember, you have within you the strength, the patience, and the passion to reach for the stars to change the world. – Harriet Tubman

Tubman’s trips to the South as “Moses,” as she had become known for leading her people to freedom, ended as the Southern states began to secede and the U.S. government prepared for war. Once war started, Tubman went South to assist with “contrabands,” escaped slaves attached to the Union Army.

The next year, the Union Army asked Tubman to organize a network of scouts and spies among black men. She led forays to gather information and persuade slaves to leave their masters. Many joined regiments of black soldiers.

Gen. Rufus Saxton, who reported the raid to Secretary of War Edwin Stanton, said: “This is the only military command in American history wherein a woman, black or white, led the raid and under whose inspiration it was originated and conducted.” Some believe Tubman was allowed to go beyond women’s traditional boundaries because of her race.

Tubman, believing she was employed by the U.S. Army, spent her first paycheck on building a place where freed black women could earn a living doing laundry for soldiers.

But she wasn’t paid regularly or given rations she believed she deserved. She received only $200 in three years of service, supporting herself by selling baked goods and root beer, which she made after she completed her regular duties.

After the war, Tubman never got her back military pay. When she applied for a pension—with the support of Secretary of State William Seward, Colonel T. W. Higginson, and Rufus—her application was denied. Despite her service and fame, she had no official documents to prove she had served in the war.

Despite Tubman’s fame and reputation, she was never financially secure. Tubman’s friends and supporters were able to raise some funds to support her. One admirer, Sarah H. Bradford, wrote a biography entitled Scenes in the Life of Harriet Tubman, with the proceeds going to Tubman and her family.

Tubman continued to give freely in spite of her economic woes. In 1903, she donated a parcel of her land to the African Methodist Episcopal Church in Auburn. The Harriet Tubman Home for the Aged opened on this site in 1908.

Tubman died of pneumonia on March 10, 1913, surrounded by friends and family, at around the age of 93. As Tubman aged, the head injuries sustained early in her life became more painful and disruptive.

She underwent brain surgery at Boston’s Massachusetts General Hospital to alleviate the pains and “buzzing” she experienced regularly. Tubman was eventually admitted into the rest home named in her honor. She was buried with military honors at Fort Hill Cemetery in Auburn.