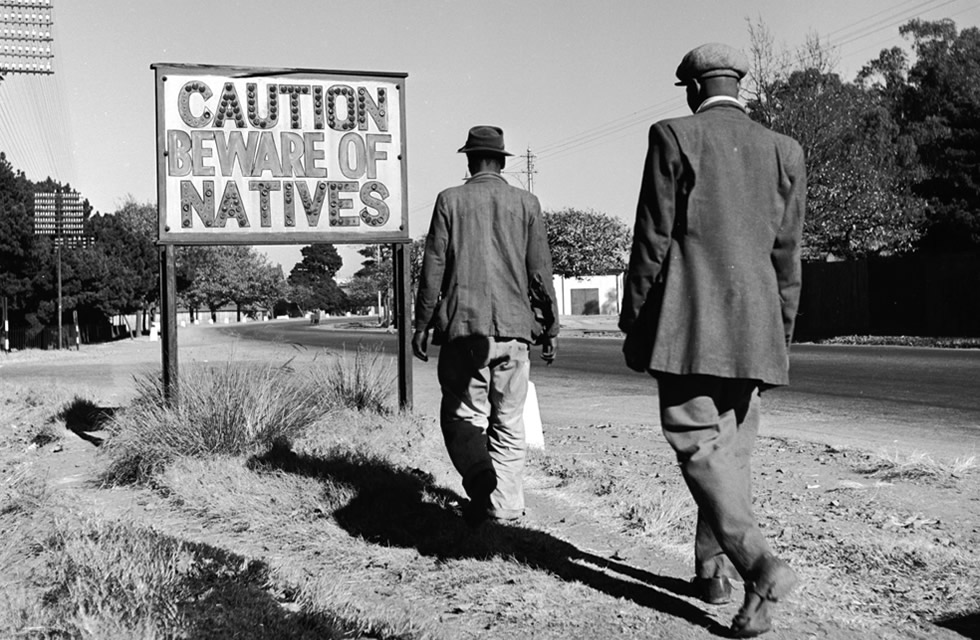 While some official and traditional segregationist policies and practices had existed in South Africa since the start of the twentieth century, it was the election of the white-ruled Nationalist Party in 1948 that allowed the legal enforcement of pure racism in the form of apartheid.

The first apartheid laws were the Prohibition of Mixed Marriages Act of 1949, followed by the Immorality Act of 1950, which worked together to prohibit most South Africans from marrying or having sexual relationships with persons of a different race.

The first grand apartheid law, the Population Registration Act of 1950 classified all South Africans into one of four racial groups: “black”, “white”, “Colored”, and “Indian.” Every citizen over age 18 was required to carry an identity card showing their racial group. If a person’s exact race was unclear, it was assigned by a government board. In many cases, members of the same family were assigned different races when their exact race was unclear.

Apartheid was then further implemented through the Group Areas Act of 1950, which required people to live in specifically-assigned geographic areas according to their race. Under the Prevention of Illegal Squatting Act of 1951, the government was empowered to demolish black “shanty” towns and to force white employers to pay for houses needed for their black workers to live in areas reserved for whites.

Between 1960 and 1983, over 3.5 million nonwhite South Africans removed from their homes and forcibly relocated into racially segregated neighborhoods. Especially among the “Colored” and “Indian” mixed-race groups many family members were forced to live in widely separated neighborhoods.

The Beginnings of Resistance to Apartheid

Early resistance to the apartheid laws resulted in the enactment of further restrictions, including the banning of the influential African National Congress (the ANC), a political party known for spearheading the anti-apartheid movement.

After years of often violent protest, the end of apartheid began in the early 1990s, culminating with the formation of a democratic South African government in 1994.

The end of apartheid can be credited to the combined efforts of the South African people and governments of the world community, including the United States.

From the inception of the independent white rule in 1910, black South Africans protested against racial segregation with boycotts, riots, and other means of organized resistance.

Black African opposition to apartheid intensified after the white minority-ruled Nationalist Party assumed power in 1948 and enacted the apartheid laws. The laws effectively banned all legal and non-violent forms of protest by non-white South Africans.

In 1960, the Nationalist Party outlawed both the African National Congress (ANC) and the Pan Africanist Congress (PAC), both of which advocated for a national government controlled by the black majority. Many leaders of the ANC and PAC were imprisoned, including ANC leader Nelson Mandela, who had become a symbol of the anti-apartheid movement.

With Mandela in prison, other anti-apartheid leaders fled South Africa and mustered followers in neighboring Mozambique and other supportive African countries, including Guinea, Tanzania, and Zambia.

Within South Africa, resistance to apartheid and apartheid laws continued. The Treason Trial, Sharpeville Massacre, and Soweto Student Uprising are just three of the best-known events in a worldwide fight against apartheid that grew increasingly fierce in the 1980s as more and more people around the world spoke out and took action against white minority rule and the racial restrictions that left many non-whites in dire poverty.

The United States and the End of Apartheid

U.S. foreign policy, which had a first helped apartheid flourish, underwent a total transformation and eventually played an important part in its downfall.

With the Cold War just heating up and the American people in the mood for isolationism, President Harry Truman’s main foreign policy goal was to limit the expansion of Soviet Union’s influence. While Truman’s domestic policy supported the advancement of the civil rights of black people in the United States, his administration chose not to protest the anti-communist South African white-ruled government’s system of apartheid.

Truman’s efforts to maintain an ally against the Soviet Union in southern Africa set the stage for future presidents to lend subtle support to the apartheid regime, rather than risk the spread of communism.

Influenced to an extent by the growing U.S. civil rights movement and the social equality laws enacted as part of President Lyndon Johnson’s “Great Society” platform, U.S. government leaders began to warm up to and ultimately support the anti-apartheid cause.

Finally, in 1986, the U.S. Congress, overriding President Ronald Reagan’s veto, enacted the Comprehensive Anti-Apartheid Act imposing the first substantial economic sanctions to be levied against South Africa for its practice of racial apartheid.

Among other provisions, the Anti-Apartheid Act:

The act also established conditions of cooperation under which the sanctions would be lifted.

President Reagan vetoed the bill, calling it “economic warfare” and arguing that the sanctions would only lead to more civil strife in South Africa and mainly hurt the already impoverished black majority.

Reagan offered to impose similar sanctions through more flexible executive orders. Feeling Reagan’s proposed sanctions were too weak, the House of Representatives, including 81 Republicans, voted to override the veto. Several days later, on October 2, 1986, the Senate joined the House in overriding the veto and the Comprehensive Anti-Apartheid Act was enacted into law.

In 1988, the General Accounting Office – now the Government Accountability Office – reported that the Reagan administration had failed to fully enforce the sanctions against South Africa. In 1989, President George H.W. Bush declared his full commitment to “full enforcement” of the Anti-Apartheid Act.

The International Community and the End of Apartheid

The rest of the world began to object to the brutality of the South African apartheid regime in 1960 after white South African police opened fire on unarmed black protesters in the town of Sharpeville, killing 69 people and wounding 186 others.

The United Nations proposed economic sanctions against the white-ruled South African government. Not wanting to lose allies in Africa, several powerful members of the U.N. Security Council, including Great Britain, France, and the United States, succeeded in watering down the sanctions. However, during the 1970s, anti-apartheid and civil rights movements in Europe and the United States several governments to impose their own sanctions on the de Klerk government.

The sanctions imposed by the Comprehensive Anti-Apartheid Act, passed by the U.S. Congress in 1986, drove many large multinational companies – along with their money and jobs – out of South Africa. As a result, holding on to apartheid brought the white-controlled South African state significant losses in revenue, security, and international reputation.

Supporters of apartheid, both inside South Africa and in many Western countries had touted it as a defense against communism. That defense lost steam when the Cold War ended in 1991.

At the end of World War II, South Africa illegally occupied neighboring Namibia and continued to use the country as a base to fight communist party rule in nearby Angola. In 1974-1975, the United States supported South the African Defense Force’s efforts in Angola with aid and military training. President Gerald Ford asked Congress for funds to expand U.S. operations in Angola. But Congress, fearing another Vietnam-like situation, refused.

As Cold War tensions eased in the late 1980s, and South Africa withdrew from Namibia, anti-communists in the United States lost their justification for continued support of the Apartheid regime.

The Last Days of Apartheid

Facing a rising tide of protest within his own country and international condemnation of apartheid, South African Prime Minister P.W. Botha lost the support of the ruling National Party and resigned in 1989. Botha’s successor F. W. de Klerk, amazed observers by lifting the ban on the African National Congress and other black liberation parties, restoring freedom of the press, and releasing political prisoners. On February 11, 1990, Nelson Mandela walked free after 27 years in prison.

On May 9, 1994, the newly elected, and now racially mixed, South African parliament elected Nelson Mandela as the first president of the nation’s post-apartheid era.

A new South African Government of National Unity was formed, with Mandela as president and F. W. de Klerk and Thabo Mbeki as deputy presidents.