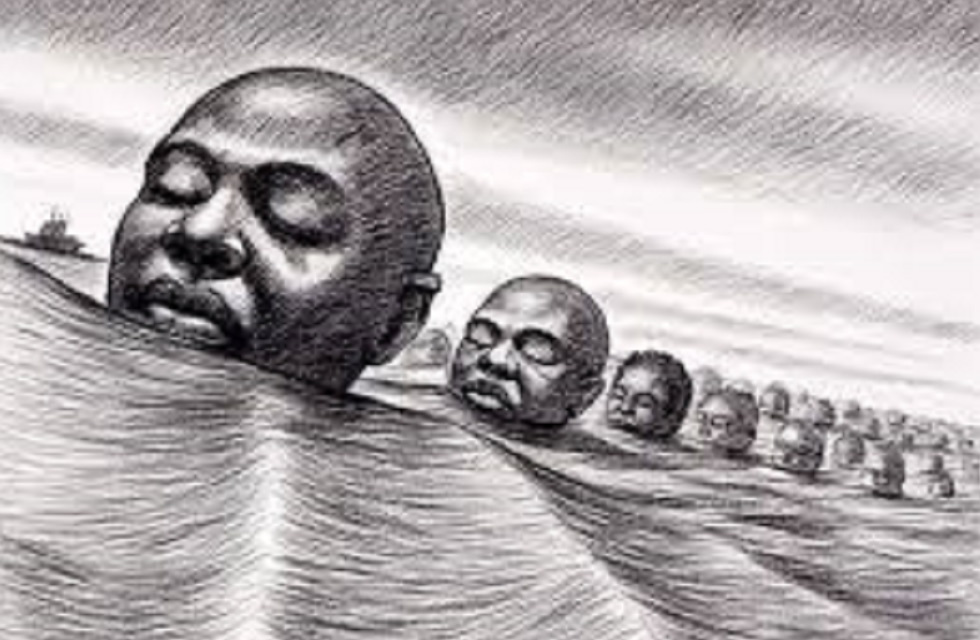 Igbo Landing which is also known as the Igbo mass suicide is one of the unforgettable historic event that happened at Dunbar Creek on St. Simons Island in Georgia, United States.

The event took place in the year 1803 and it was recorded as one of the largest mass suicides of enslaved people when Igbo captives from what is now Nigeria were taken to the Georgia coast. The Igbo and other West African captives arrived in Savannah, Georgia, in May 1803 on the slave ship the Wanderer.

It was believed that these soon to be slaves were purchased for an average of $100 per head by the slave merchants in the persons of John Couper and Thomas Spalding with the intention to be resold to the plantations on nearby St. Simons Island in Georgia.

It was said that the chained slaves were packed under deck of a coastal vessel, the York, which might take them to St. Simons. During the voyage, approximately 75 Igbo slaves rose in rebellion, took control of the ship, drowned their captors, and within the process caused the grounding of the ship in Dunbar Creek.

The course of events that occurred next remains unclear. It is known only that the Igbo marched ashore, singing, led by their high chief.

Then at his direction, they walked into the marshy waters of Dunbar Creek, committing mass suicide. Roswell King, a white overseer on the nearby Pierce Butler plantation, wrote the primary account of the Igbo mass suicide incident.

He and another man identified only as Captain Patterson recovered many of the drowned bodies. Apparently only a few numbers of the 75 Igbo rebels drowned.

Thirteen bodies were recovered, but others remained missing, and a few may have survived the suicide episode, making the particular numbers of deaths uncertain.

Regardless of the numbers, the deaths signaled a strong story of resistance as these captives overwhelmed their captors during a strange land, and lots of them took their own lives instead of remain enslaved in the New World. The Igbo Landing gradually took on enormous symbolic importance in local African American folklore.

The mutiny and subsequent suicide by the Igbo people were called by many locals the primary freedom march within the history of Africa. Local people claimed that the Landing and surrounding marshes in Dunbar Creek where the Igbo people committed suicide in 1803 were haunted by the souls of the dead Igbo slaves.

The story of Igbo, who chose death over slavery which had long been a part of Gullah folklore, was finally recorded from various oral sources within the 1930s by members of the Federal Writers Project.

While many historians for hundreds of years have cast doubt on the Igbo Landing mass suicide, suggesting that the whole incident was more legend than fact, the accounts Roswell King et al. provided at the time were verified by post-1980 research which used modern scientific techniques to reconstruct the episode and ensure the factual basis of the longstanding oral accounts.

In September 2002, the St. Simons African American community organized a two-day commemoration with events associated with Igbo history and a procession to the location of the mass suicide.

Seventy-five attendees came from different states across US, also Nigeria, Brazil, and Haiti. The attendees designated the location as a holy ground and involved the souls to be permanently at rest. The Igbo Landing is now a part of the curriculum for coastal Georgia schools.

The 1815 Igbo conspiracy in Jamaica’s Saint Elizabeth Parish which involved around 250 Igbo slaves, described together of the revolts that contributed to a climate for abolition.

A letter by the Governor of Manchester to Bathurst on April 13, 1816 quoted the leaders of the rebellion unproved as saying “that ‘he had all the Eboes in his hand’, aiming to insinuate that each one the Negroes from that Country was under his control”. The plot was thwarted and a number of other slaves were executed.

The 1816 Black River rebellion plot which consistent with Lewis (1834:227—28) only people of ‘Eboe’ origin were involved. This plot was uncovered on March 22, 1816 by a novelist and absentee planter named Matthew Gregory ‘Monk’ Lewis, when he had recorded what Hayward (1985) calls a proto-Calypso revolutionary hymn, sung by a gaggle of Igbo slaves led by the ‘King of the Eboes’. They sang:

‘Mr. Wilberforce’ was in regard to William Wilberforce a British politician who was a pacesetter of the movement to abolish the slave traffic . ‘Buckra’ was a term introduced by Igbo and Efik slaves in Jamaica to ask prostitute masters.

Among Igbo cultural items in Jamaica were the Eboe, or Ibo drums popular throughout all of Jamaican music. Food was also influenced, for instance the Igbo word ‘mba’ meaning ‘yam root’ was wont to describe a kind of yam in Jamaica called ‘himba’. Igbo and Akan slaves affected drinking culture among the black population in Jamaica, using alcohol in ritual and libation.

In Igboland also as on the Gold Coast, palm wine was used on these occasions and had to be substituted by rum in Jamaica due to the absence of palm wine.

Jonkonnu, a parade that’s held in many West Indian nations, has been attributed to the Njoku Ji ‘yam-spirit cult’, Okonko and Ekpe of the Igbo, and a number of other masquerades of the Kalabari and Igbo have similar appearance to those of Jonkonnu maskers.

Much of Jamaican mannerisms and gestures themselves have a wider African origin and an Igbo origin.

Some samples of such behaviours are evident within the influences of the Igbo language in patois with actions like ‘sucking-teeth’ coming from the Igbo ‘ima osu’ or ‘imu oso’ and ‘cutting-eye’ from Igbo ‘iro anya’. There was also a suggestion of the Igbo introducing communication through eye movements.