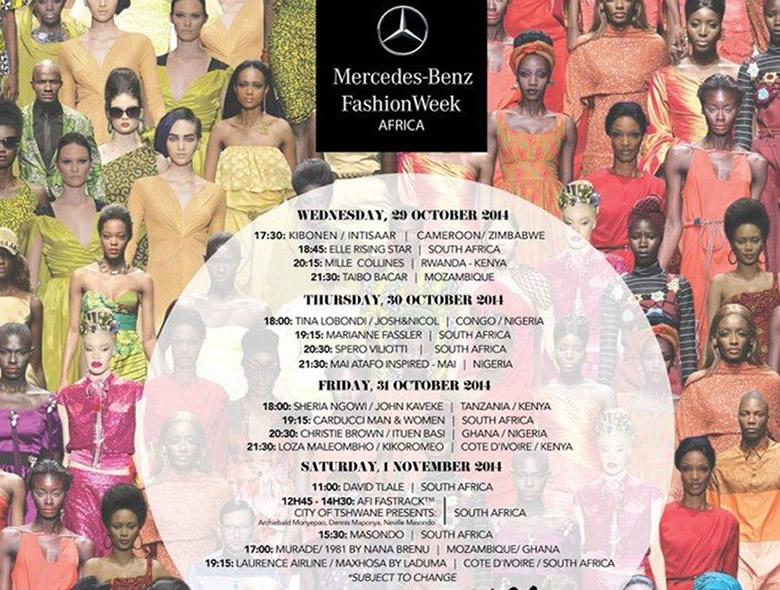 Thousands of fashion industry icons and local and international media are set to converge on Melrose Arch, Johannesburg, for the fifth annual Mercedes-Benz Fashion Week Africa (MBFWAfrica), next week, (from 29th October to 1st November) to celebrate not only Africa’s newfound identity as a trend-setting continent, but one with a clothing and textile industry now able to rival any in the world.

South Africa, home to Cape Town and Johannesburg, which ranked 27th and 37th respectively as global fashion capitals, has received major support from governing bodies in terms of growing its fashion and textile industries, with the Department of Trade and Industry recently approving a R200-million grant and five-year plan for The Southern African Sustainable Textile and Apparel Cluster – a clear indication of the government’s appreciation of the industry’s economic value and potential.

While a combination of factors have made for African fashion’s newfound stature – including a profound, modern take on African heritage – none can be more significant than the growth of the new African middle-class which has brought about a boom in the clothing and textiles sectors.

Home to seven of the world’s fastest-growing economies, consumer spending in Africa is set to rise from US$860 billion in 2008 to USD$1.4 trillion in 2020, according to the McKinsey Global Institute, while Nigeria’s middle class grew 600% between 2000-2014 alone.

Add to this that African designers are receiving significant international repute and the feeling is that the continent’s fashion, design and textile industry is here to stay.

In turn, the market’s growth has also had a significant impact on the visibility of local designers, who are being stocked by a rapidly increasing number of top national clothing chains, such as Mr Price, Foschini, and Young Designer’s Emporium.

In addition, these designers are making their presence felt online via their own virtual stores, as well as those of major fashion retailers such as Spree and AFI PRIVÉ, African Fashion International’s exclusive, curated online designer collection.

To conclude the fashion-fest, on the last day of the MBFWAfrica, the continent’s fashion finest will be recognised at glittering Fashion Awards ceremony – The Africa Fashion Awards which will be brought by the leading fashion authority, African Fashion International (AFI). The AFAs are the continent’s foremost industry awards, recognising and celebrating exceptional achievement in fashion, modelling, retail and other clothing-and-textiles-related arts from Africa and its diaspora.

A striking line-up of over 50 male and 50 female models from around the world will walk the MBFWAfrica runway.

“From a database of over 100 agencies, through a stringent casting process, the top models from Africa and around the world have been shortlisted for designers’ ultimate selection. For MBFWAfrica 2014, AFI looked for a strong editorial look, charisma, presence, and the ability to translate a range of different designer’s style aesthetics; from couture to ready-to-wear. We are also constantly on the lookout for exciting new breakthrough faces,” says AFI Technical Director, Deon Redman.

And the designers are…

Over 30 of Africa’s foremost established and emerging designers will showcase at the MBFWAfrica. The stella line-up includes sartorial talent from all over Africa – including Cameroon, Zimbabwe, South Africa, Rwanda, Kenya, Mozambique, the Democratic Republic of Congo (DRC), Nigeria, Tanzania, Ghana and Cote d’Ivoire – set to showcase under this year’s theme, “Our Heritage Reimagined”.

The showcase will close out in style on Day Four, beginning with the much-anticipated capsule collections of the AFI Fastrack™ winners – Rich Mnisi, Jessica Ross, Nazneen Kagee and Tuelo Nguyuza – who will vie for the title of AFI Young Designer of the Year. Thereafter, the City of Tshwane Presents Show will bring designs from Archiebald Monyepao, Dennis Maponya &amp; Neville Masondo to the ramp.