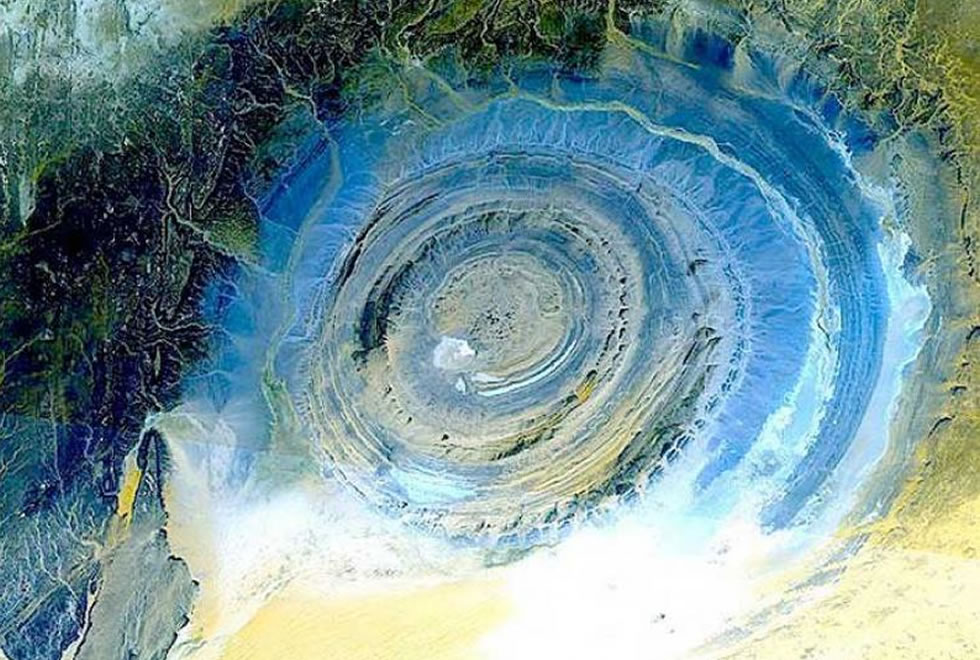 Many travel enthusiasts recognize Africa as a great destination for wildlife safaris, beach holidays, adventure travel, and other conventional forms of vacations. But not very many people are aware of the strange, weird, and unusual activities and destinations you can enjoy in Africa, especially if you are a lover of “off the beaten path” traveling.

Did you know for example that you can go on ghost hunting safaris in South Africa? You get to visit haunted places, see ghosts, and experience paranormal phenomena, among other things. You can find details about this and related tours at the mystery ghost bus tours website.

Below are what I consider to be the top five mysterious places in Africa. Of course, this is one man’s opinion. If you know of other equally or more deserving places, let us know in the comments.

1. The Great Eye of Africa in Mauritania
(Also know as the richat structure, or earth’s bulls eye).

This is a huge, mysterious, circular depression (diameter 50 km) that looks like a human eye when observed from space. It is located in the Sahara desert in Mauritania. Scientists have put forth several theories to explain how the structure was formed, but none of these explanations is universally accepted. One theory holds that it was formed from the impact of a meteor landing.

Can You Visit The Place?
Yes you can. I found some useful information on how and when to travel there at this website. The place may not be as spectacular on the actual ground as it appears from space (like this guy notes), but you also experience a great adventure in the desert.

Look at the above picture. You might think it is of a surface on the moon, Mars, or some other extra-terrestial place. But no, it is a true picture of a place in Dallol, one of the many strange and weird sites in the Danakil Depression.

The region is an extremely low altitude (most of it way below sea level) depression lying accross the Ethiopia-Eritrea-Djibouti border. The area has such harsh climatic conditions that the National Geographic has called it “the cruelest place on earth”. Temperatures as high as 67 degrees Celsius have been recorded here.

But besides its harshness, it is home to some incredibly strange features among them Erta Ale (the lava lake), the sulfur springs and bizarre land formations at Dallol, and the salt plain at Lake Asal.

They say a picture speaks a thousand words. Perfect, because this photo gallery shows some of the weird features at Dallol. You may also be interested in reading the photographer’s account of his experience in Dallol, as well as this first-hand Danakil Depression trip report at lonely planet.

How to visit the place
The only way to travel to the Afar depression is by using a tour operator, and there are a few reputable ones. I recommend that you have a look at some of the Ethiopia holiday packages, including tours to Danakil depression, provided through the Africa Guide Website

In this previous post, I noted how Madagascar is one of Africa’s “undiscovered” travel gems. This is because this great island is home to some of the most weird wild animals in the world, and several “out of this world” landscapes. You can enjoy a primate safari in Madagascar the best place to see Lemurs, in the world.

The Tsingy de Bemaraha Strict Reserve is most notable for its bizarre limestone towers interspersed with vegetation to form an interesting landscape. Several rare animal species live in this limestone needles forest.

Can You Visit the Place?

At first glance, you may not see anything spectacular in the above photo of Lake Nyos. But the lake is remembered for one of the strangest disasters of the modern world. One night in August 1986, about 1,800 people and over 3,000 cattle and other animals in villages near Lake Nyos, died under very mysterious circumstances. No bleeding, no exposure to radiation, no physical trauma, no disease, no chemical weapons; It was as if they just shut down and dropped dead.

Even more creepy, all the oil lamps in the villages were extinguished, as if by an unseen hand. The Lake had lived up to its name of “the bad lake” and the legend of evil spirits that reside in it.

Of course, scientists have since explained what could have caused this. Read this article and this one too to find out.

I mentioned the Virunga mountains range in a previous post about best places to go gorilla trekking in Africa. Apart from the popular gorilla treks in the Virunga National Park, there’s much more to Virunga than just the mountain gorillas. The Nyirangongo crater is one such spectacular attraction. The lava lake at Nyiragongo is reputed to be the largest in the world, and gives us perhaps the closest glimpse of how hell (the lake of fire – if you believe in it) looks like.

See these amazing photos to understand what I am talking about.

Want to travel to Nyiragongo?
Several tour operators organize climbing and trekking expeditions to the rim of the crater.